March 24th is a public holiday in Argentina, the Day of Memory for Truth and Justice. It is a day of protest in Buenos Aires to remember the “desaparecidos,” 30,000 people who were “disappeared” during the military dictatorships in Argentina in the 1970’s and early 1980’s. The disappearances are a relatively recent memory and are still a strong presence in everyday culture and politics, in part because many of those who participated have still never been tried for crimes. The Madres de la Plaza de Mayo are a well-known group of women whose children and grandchildren were disappeared, and they march in the Plaza de Mayo every Thursday afternoon in front of the presidential Casa Rosada. Saturday’s march ended in the same Plaza. I’m still struggling to understand everything that happened during this period of Argentinian history but the basic idea is that 30,000 citizens, leftists, students, labor organizers and “guerillas” were abducted, tortured and killed by militias allied with the government. Based on conversations with friends here, snippets of news from the TV and Clarin newspapers and wikipedia research, here’s an outline of what I understand so far. Juan Peron was a hugely popular President of Argentina during the forties and fifties. He was deposed and spent 20 years in exile in Spain. During this exile his many supporters organized into opposing “Peronist” factions, left wing and right wing. When Peron returned from exile in 1973, he sided with the right wing faction against the leftists. Juan Peron died during his third presidential term, in 1974, leaving his third wife and vice president Isabel Peron in power. She signed a series of decrees enabling the police and military to “annihilate” left-wing subversives. She was deposed in 1976 by a military coup, and the disappearances increased under the military dictatorship until 1983 when the last military dictator stepped down.

Within a few blocks of our house, in Palermo and Almagro, there have been protests outside the comfortable homes of former officials and professionals who took part in the genocide and have never been tried for any crimes. Some top officials were tried in 1984, but these were followed by pardons and laws of amnesty. In 2005 the Argentinian supreme court overturned the amnesty and trials began in 2006 but have been proceeding slowly and with difficulties. In January of 2007, Isabel Peron was arrested in Spain and is pending extradition to Argentina to testify in court about her role in the disappearances. In the first trial of 2006, against former Police officer Miguel Etchecolatz, one witness was Jorge Julio López, who was one of the desaparecido from the 1970’s. After his 2006 testimony, he disappeared again and is still missing. The general suspicion is that he was abducted by current and former police forces in an effort to intimidate others from testifying in the future. 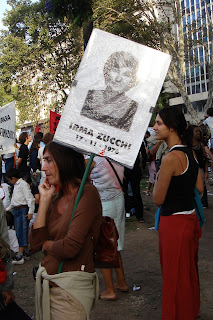 The memories of the desaparecidos are preserved by the Madres of the Plaza de Mayo, by the living parents, children and friends of those who disappeared, and by some surviving desaparecidos. A few weeks ago a friend of ours told us that both of her parents are surviving desaparecidos. Some children were taken from young mothers or pregnant mothers, and raised by military families, and are now being reunited with their surviving relatives. Here’s a short article from Clarin about an interesting art project using instant messaging on MSN to create a memorial space , and here is a link with more details (in spanish) about yesterday’s events.