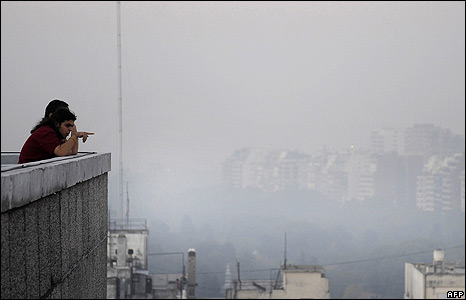 ……….. i promised myself not to post any more boring whiny quality-of-life posts (see: internet disaster) for a while, but OH MY GOD. this is so so so so intense i can’t not write about it. Buenos Aires is totally filled with foul, evil-smelling, thick smoke. It’s been here for 3 days and it’s really hard to live. I mean, it’s stinging my eyes and hard to breathe, and it hurts my throat and it makes my head hurt and it makes me feel sick and it wakes me up at night when I can’t sleep for the stench. It’s like an evil thick thick milk fog in the streets outside, but it goes all the way up into the sky and it comes inside the houses and buildings. Last night we went to see a movie at the mall, and the mall was filled with smoke and inside the theater you could see the smoke, thick in the beam of the projector. I am praying that there is no smoke in Montevideo because I can’t stand it any longer. Also, I don’t know if we’ll be able to get to Montevideo this afternoon because I think they’ve closed down most of the city’s roads and transportation, and maybe the port, due to low visibility.
The story is that farmers in Entre Rios have been burning fields and pastures, and that the fires have spread out of control, and the wind is bringing all the smoke straight into the city. Fires have spread to islands in the river delta, now most of the fires are on islands, which are hard to reach and extinguish. Clarin says that only a “change in the weather” can put out those fires, and firefighters are now just fighting to contain the fires from spreading further. The thing is that last week we also had one day of intense, fierce smoke, and it barely hit the news – though the brief statements said it was also attributed to farmers burning land. At that point i was all freaking out already, like “why doesn’t someone do something about this?” and the president and the mayor were totally silent and there was no mention of, say, putting out the fires, or prohibiting intentional burning of farmland. Last week they just ran a statement saying it was no big deal and the smoke’s not toxic. NOW the smoke is back, and it’s much worse, and the government’s all “oh god, it’s out of control, we’re doing everything we can but we can’t put the fires out! we’ll never allow this to happen again!” So it makes me feel like they just ignored the problem until it became too big to control, and now it’s too late! Not sure if that’s really accurate, but everybody knows it makes you feel a tiny bit better if you can blame someone for your suffering. The paper says the smoke is not toxic because it’s coming from organic materials, but I am skeptical about that, I’m pretty sure this is not good for living creatures.
Anyway… this sucks. Really really sucks. Can’t breathe. Head hurts. I wish I could get out of this smoke, I wish I knew somewhere to go. I wish I could go up to Maine and breathe fresh air for the weekend. I hope this isn’t giving me brain damage or something. I read that the smoke has reached Montevideo too, but I’m hoping maybe it’s not as bad there. And hoping they will open the port in time for our ferry this afternoon! HELP! got to get out of here. “Buenos Aires,” my ass!