We left Tupiza early, in a Land rover with our driver Santos and his wife Silvia(?) and a young Argentine couple from Buenos Aires (Laura and Fernando; we were randomly put together but they turned out to be really nice). Drove out of town up a dry riverbed, and passed workers repairing a damaged section of the train line (the one that we’d hoped to take to Tupiza). We passed red cliffs and bounced up a steep, rock and gravel switchback road before stopping to look out at the Sillar de San Pablo de Lípez, where the earth drops away steeply on either side of the road, and there are crazy red rock formations carved by rainfall, I guess. The land is so steep and dry, I think whenever it rains everything just floods and crumbles away. 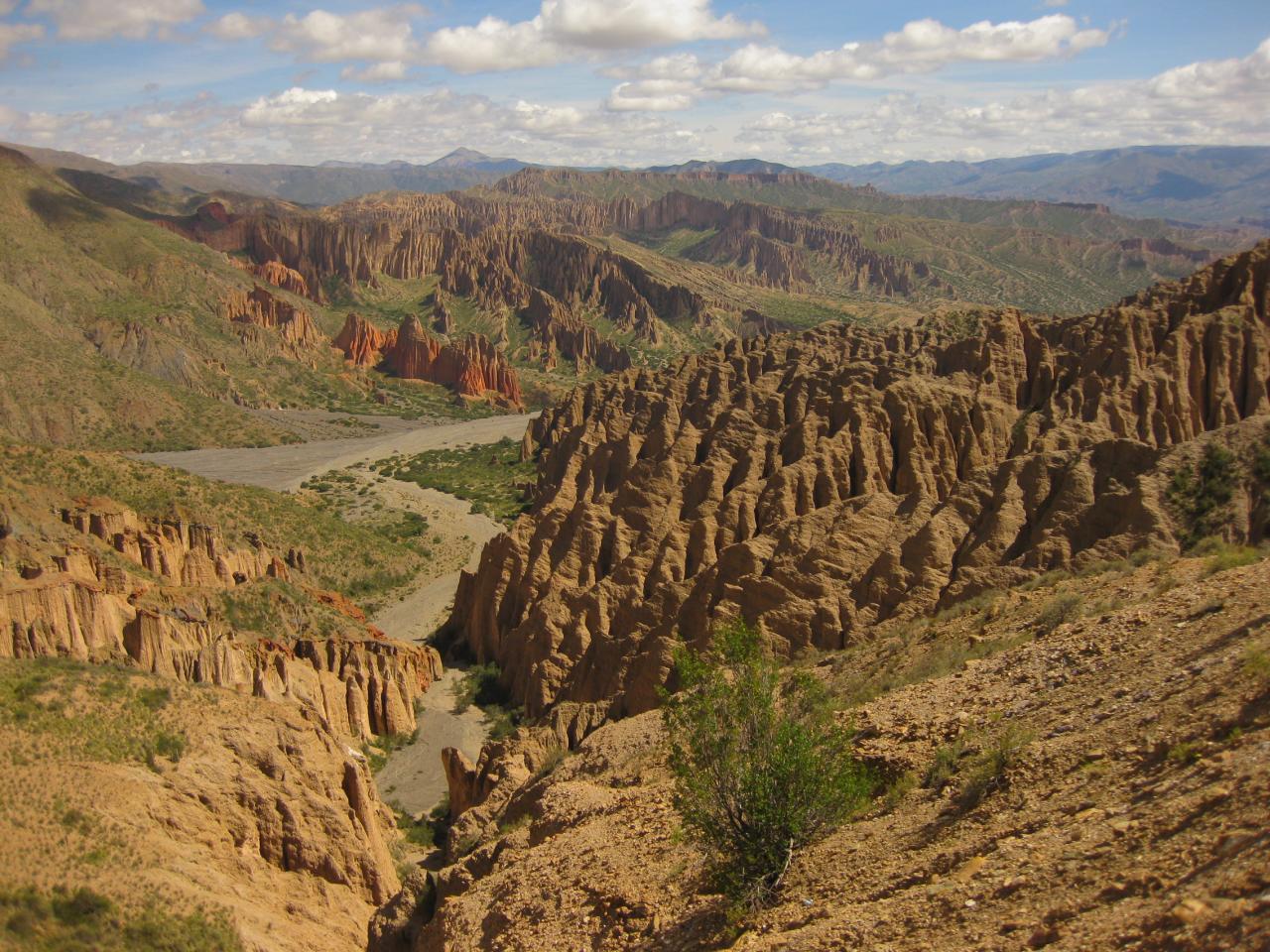 Then onwards in a bumpy, hairpin ascent. As we all gasped and tittered about the scary road, Santos turned back and said “Don´t worry about it, I’m a great driver, you’re going to be completely safe!” with a huge grin. We bounced and jostled up and up and up, passed grazing llamas and rock corrals on the hillsides, went through one tiny town with adobe houses and terraced gardens and a single baby llama wandering in the street. We had a delicious picnic lunch (tamales and sandwiches) and climbed about on the hills a bit (slowly, in the thin high air), then jostled onwards. 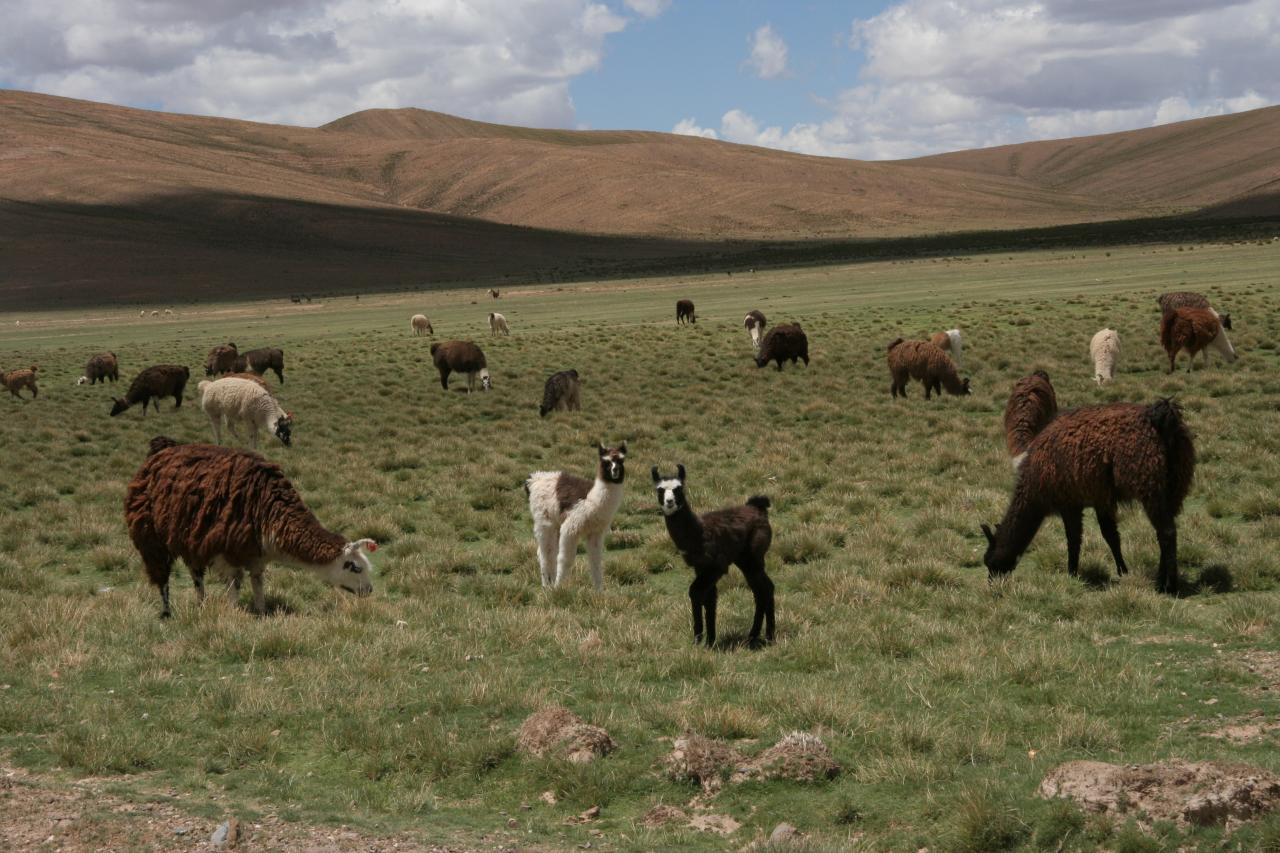 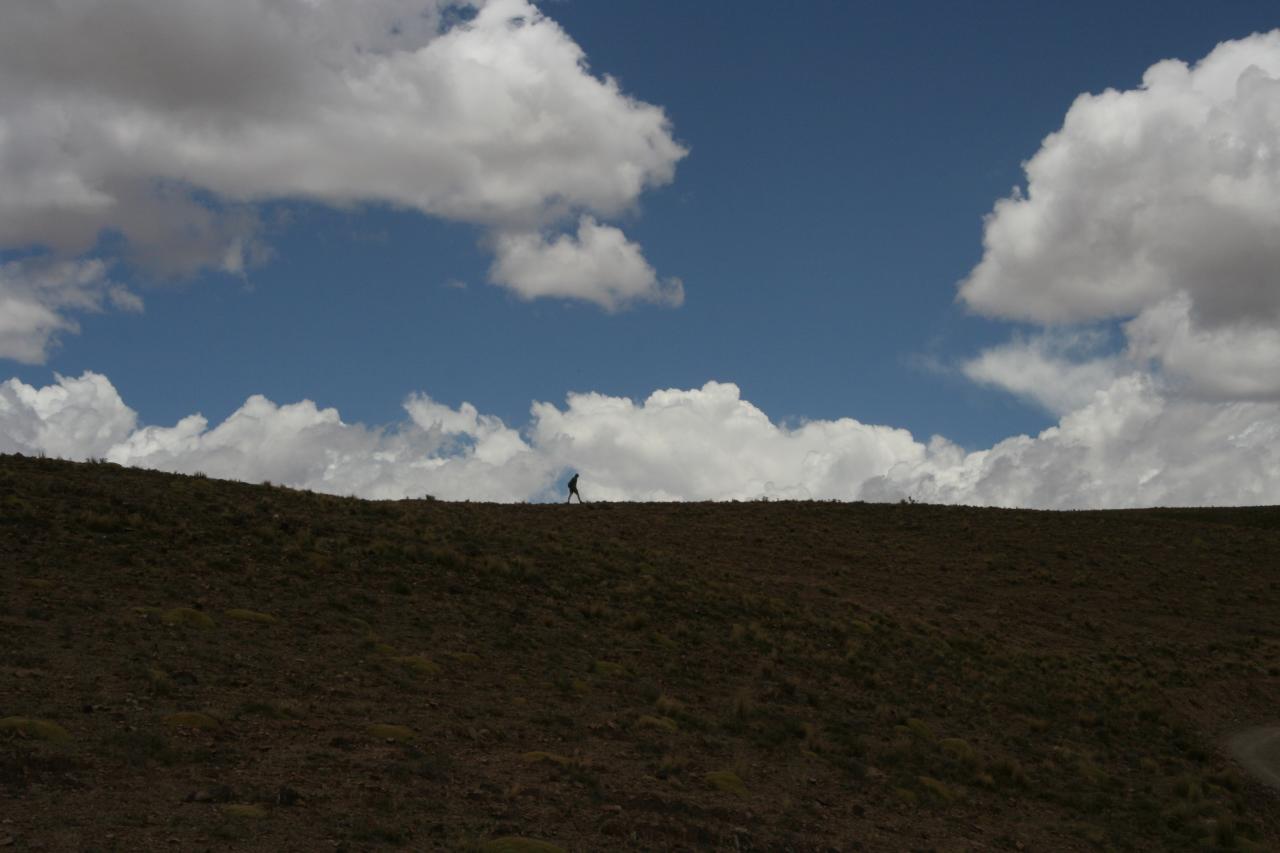 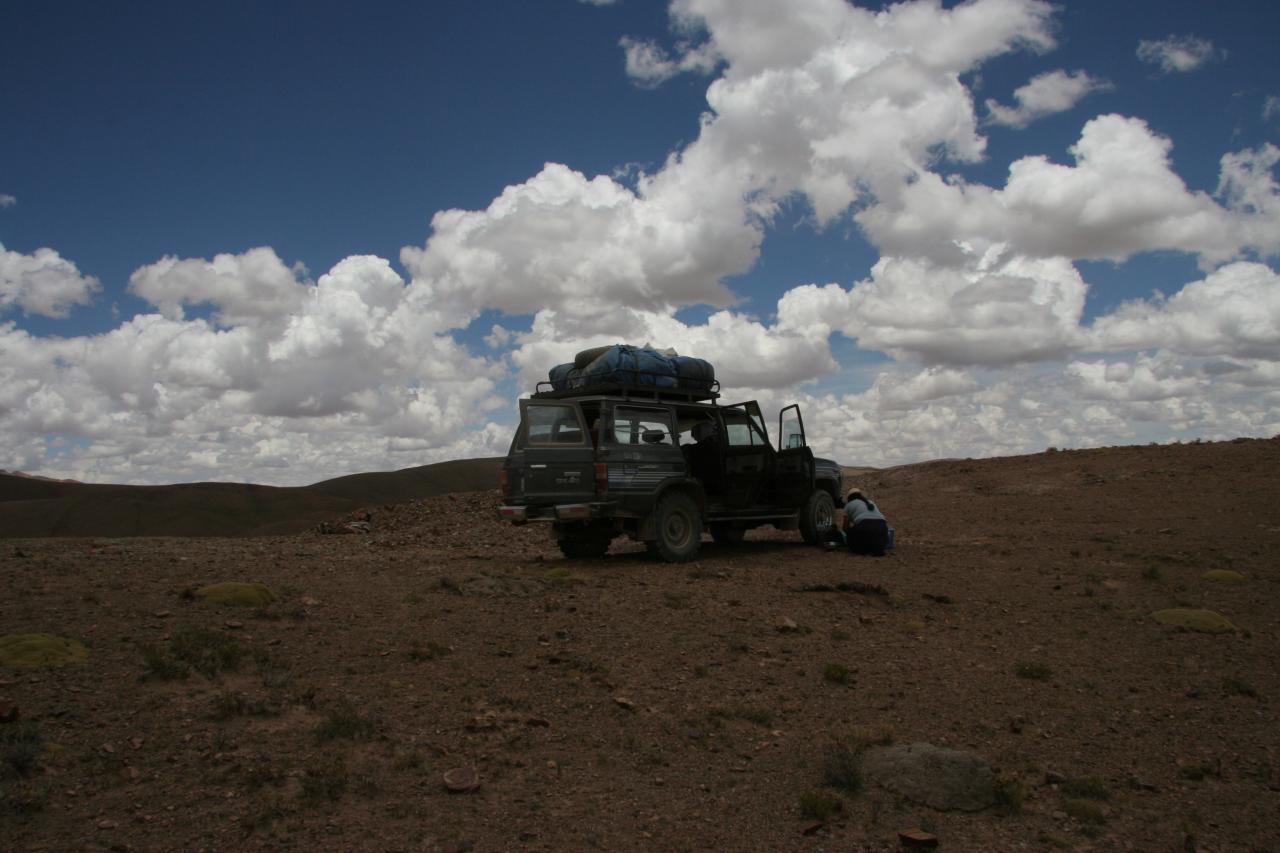 We stopped in a bigger town, San Vicente, which had a military base, a town hall, a church, and maybe 20 or 30 adobe houses. This is the capital of the Lípez province! (Population of Lípez is maybe 50,000 people and many many llamas.) Bumping onwards, the sky got darker and we could see rain in the distance, then spectacular lightning in the mountains ahead. We pulled into San Antonio de Lípez (altitude 4,200 meters, population 430 people) around 5:00 and dragged our packs down from the roof of the jeep just as it started to hail. We’d left Tupiza amongst a caravan of other tour jeeps, but hadn’t seen much of the other jeeps all day; now they all turned up in the same town but stayed in different houses scattered around the village. We had a cozy tea time, then when the hail stopped we climbed up the nearby hill to see the town, watched a raucous, impromptu basketball game (tourists vs. local kids and dogs) and then Silvia served us a tasty dinner in one of the adobe rooms. Fell asleep under thick heavy piles of alpaca wool blankets, in very uncomfortable beds that were beautifully stenciled with bright flower patterns. Woke up at 5:30 am and had a breakfast of crackers and tea. Everyone was looking pretty wilted from altitude and restless sleep. We bounced off as the sun rose, and stopped at the ruins of the old San Antonio, an impressive town of many roofless, crumbling stone buildings, dark in the valley with the early sunlight burning orange on the mountain peaks above. Santos told us some old tale about two devils that lived in the town, and something about decadence and divorces and immoral living and some kind of curse – in explanation for why the town was abandoned. There were two different church buildings, one older and one newer, and it seemed like various parts of the town had been used and abandoned at different times since the 16th century. The newest buildings were from a fruitless mining exploration in the 1960’s. The town’s cemetery still had newish plastic flowers and Santos said that the farm families in the surrounding hillsides still bury their dead in that cemetery. Then onwards, up and down hills over dirt and mud roads, jiggling and bouncing mercilessly in the back of the jeep. Mike was feeling really sick and miserable and slept on my lap a lot. We stopped at a few different weirdly-colored lagoons, encrusted with natural borax or salt deposits around the edges and filled with flamingos. I had no idea that borax existed in nature like this, nor that flamingos were such fans of fetid-looking, crusty salty lagoons in the desert. Laguna Verde. The green color comes from copper, chloride and some other minerals in the soil. In the wilderness of Lípez, southwest Bolivia Everything about the lagoons was beautiful but weird and sort of poisonous-looking. The strange colors of the various lagoons come from different minerals present in the soil. At mid-day we stopped at a natural hot spring to go swimming! It was my first time in a hot spring and I was super excited about it. It was hot and felt SO GOOD but then I got dizzy after a while and had to stagger out. swimming in the hot springs Then onwards to more weird colored lagoons, then some stinky, sulfury geysers. We felt really fatigued from all the bouncy driving and were very happy to get to our night’s lodging, a spartan hospedaje in the middle of nowhere. We had a fantastic dinner from Silvia, and met some other nice backpackers from various parts of the world. By bed-time Mike felt much better but I felt bad and I had a horrible, sickly, sleepless night.
Next morning we got to sleep in until 6:00, then headed off to see the Laguna Colorada, the biggest and most spectacular of all the salt lakes. It is bright red because of algae that thrives in the warm, mineral-rich, salty water. There are three dormant volcanoes reflected in the red lagoon. 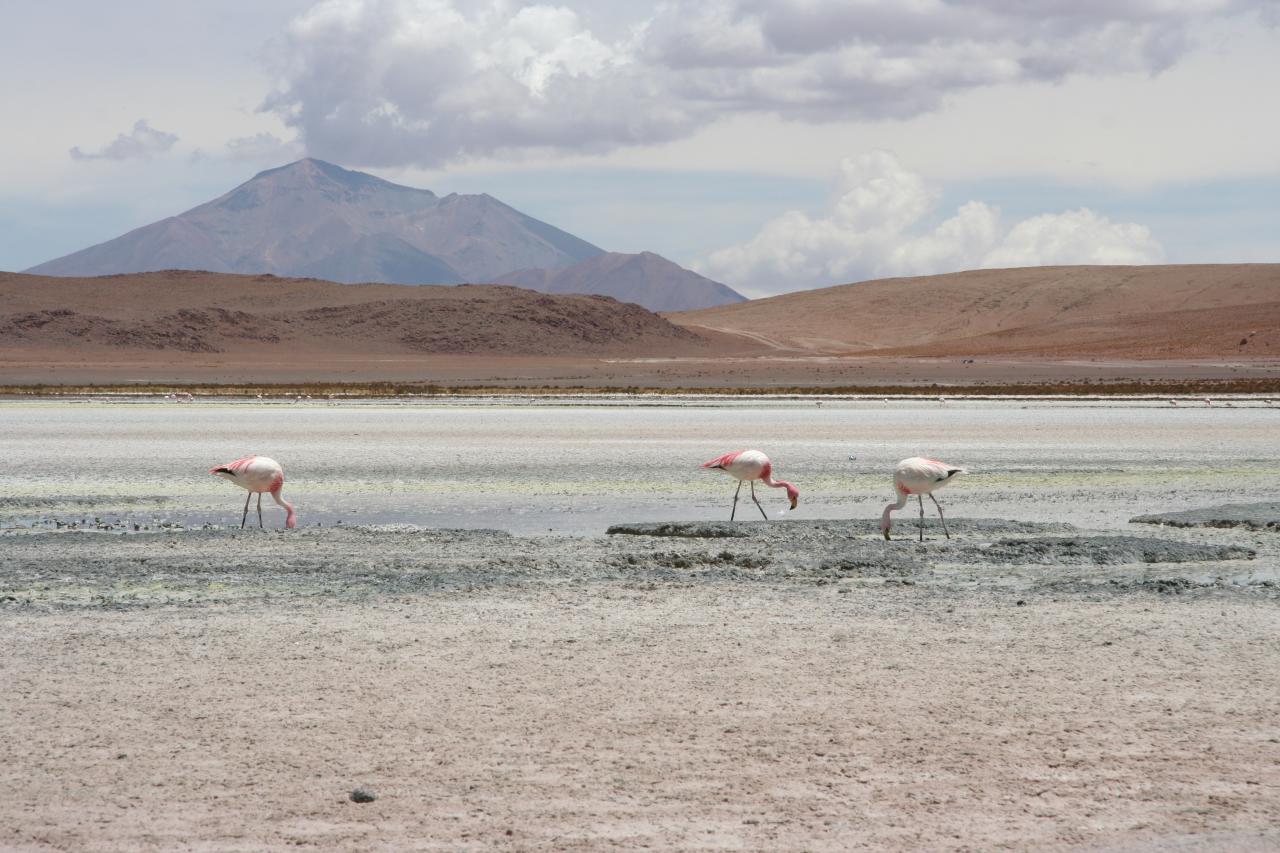 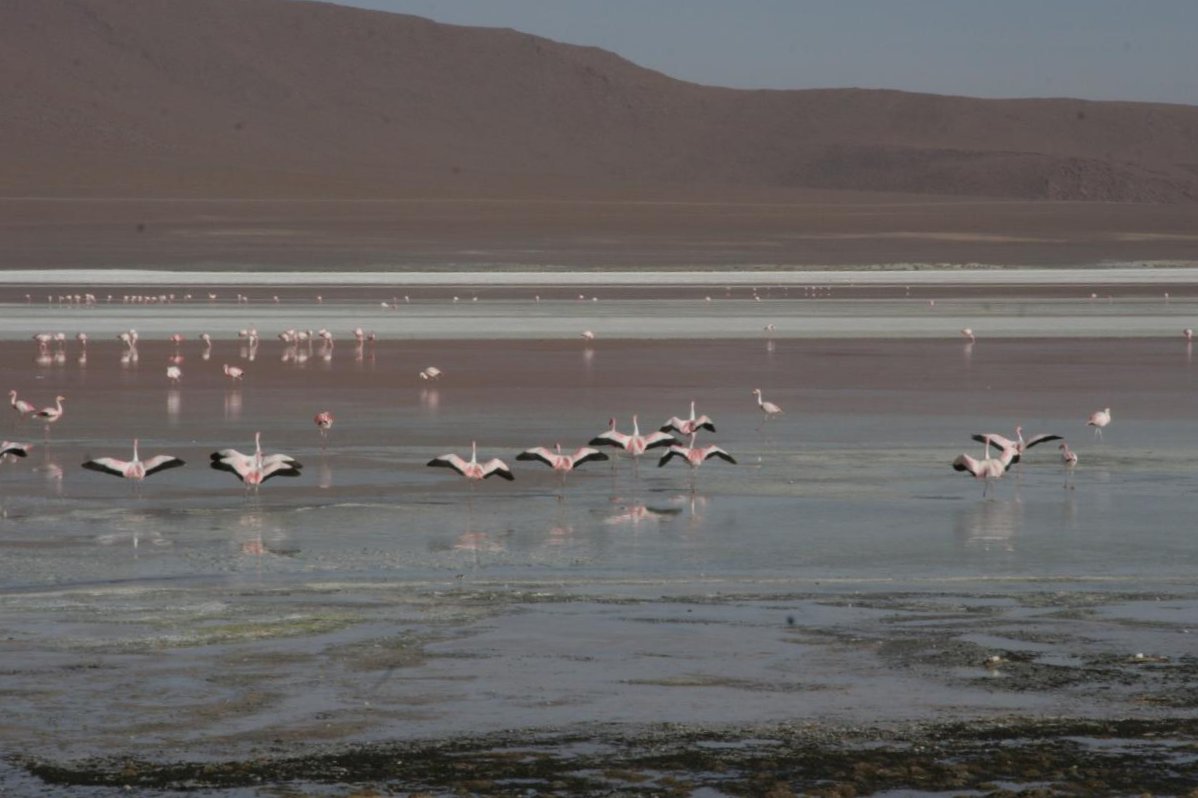 we saw a thousand flamingos at their breeding ground. Laguna Colorada in the wilderness of Lípez, southwest Bolivia

It’s also home to gazillions of flamingos, all three of the South American flamingo species go there to breed every year. Then onwards through smooth, sandy desert. Stopped to see a grouping of weirdly-shaped volcanic rocks, including the Arbol de Piedra (Rock Tree). 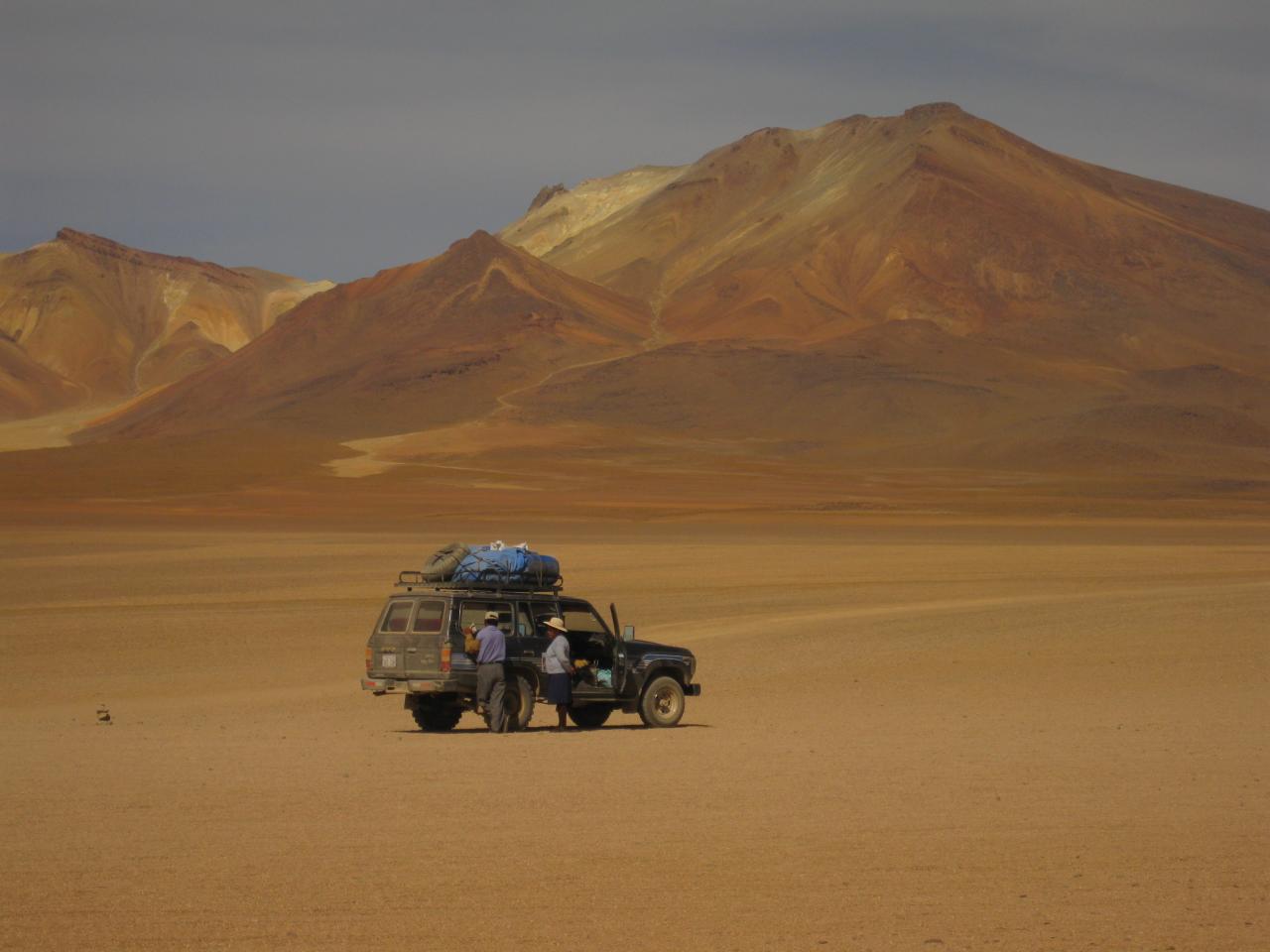 Then we drove on and on and on, descending in elevation, and even Santos complained that the roads were horrible. We stopped for lunch in a lava field, an undulating sea of strange red forms, tons of rock formations to climb, nooks and crannies and archways and in the distance, an active volcano trailing a wisp of smoke from the cone. 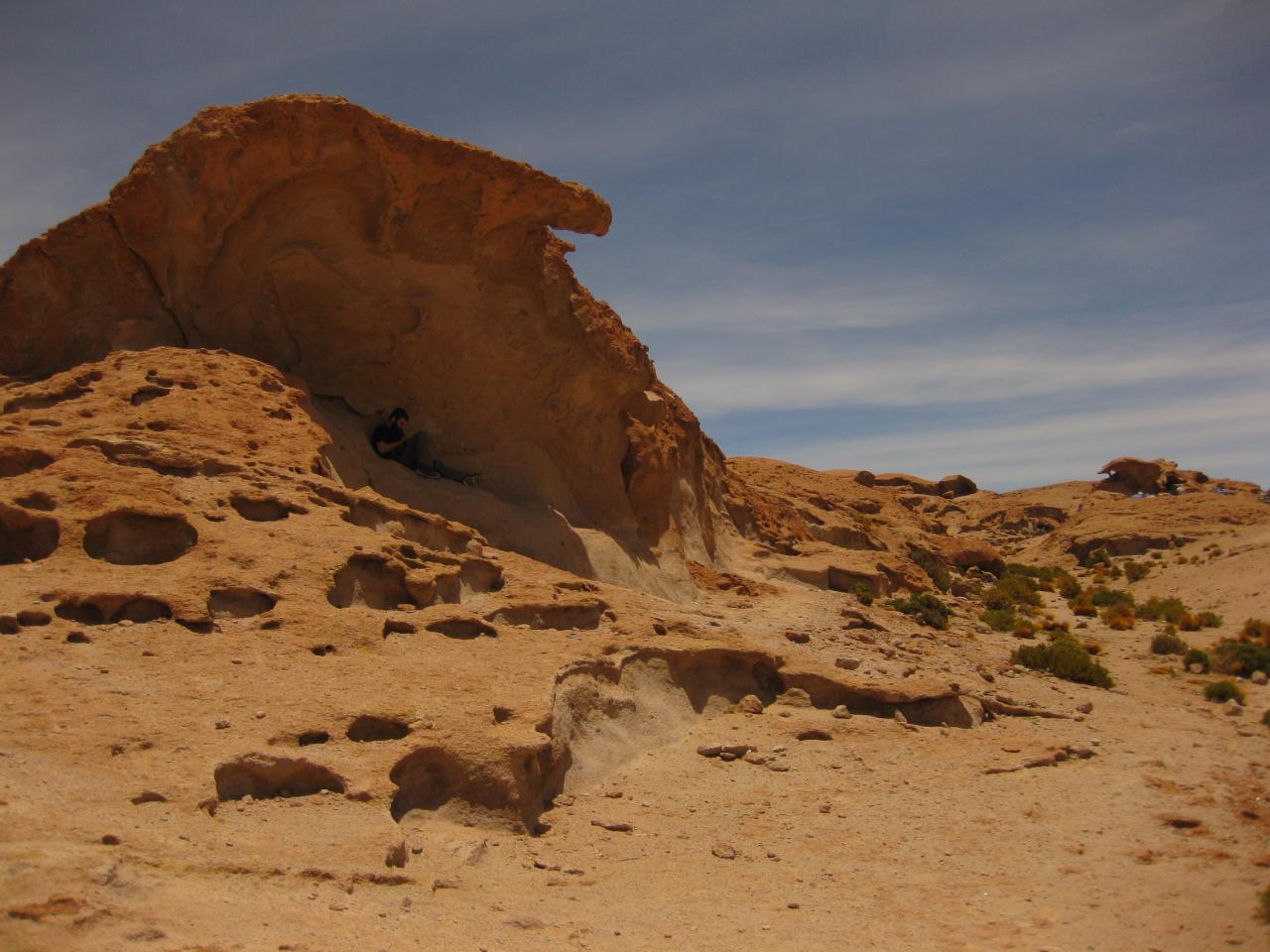 We stopped in a little town of San Juan and saw a museum about the indigenous history of the area, quinoa farming, and the local historic practices of mummification. On the road out of town we were hailed down by a group of confused Czech guys driving their own jeep (on all of these roads, the only vehicles we pass are farmers or other jeep tours) who asked which way to Chile. Santos said “See that mountain over yonder? Go there, and then Chile is to the left.” I translated this into English for them and then they headed off into the dust, apparently satisfied with the directions. We crossed a small salt flat and then the road hugged a wall of elaborately-shaped cliffs. Long long long ago, when the salt flat used to be an inland sea, these cliffs were the rocky shores and they were completely covered by coral; the elaborately shaped rocks are coral skeletons, and if you look way up above, you can see the line where they stop was once the water level. Our night’s lodging was a “hotel” built entirely from salt, perched up among the cliffs. It was super basic but really cozy and comfortable and we were both immensely thankful for and improved by a good night’s sleep. 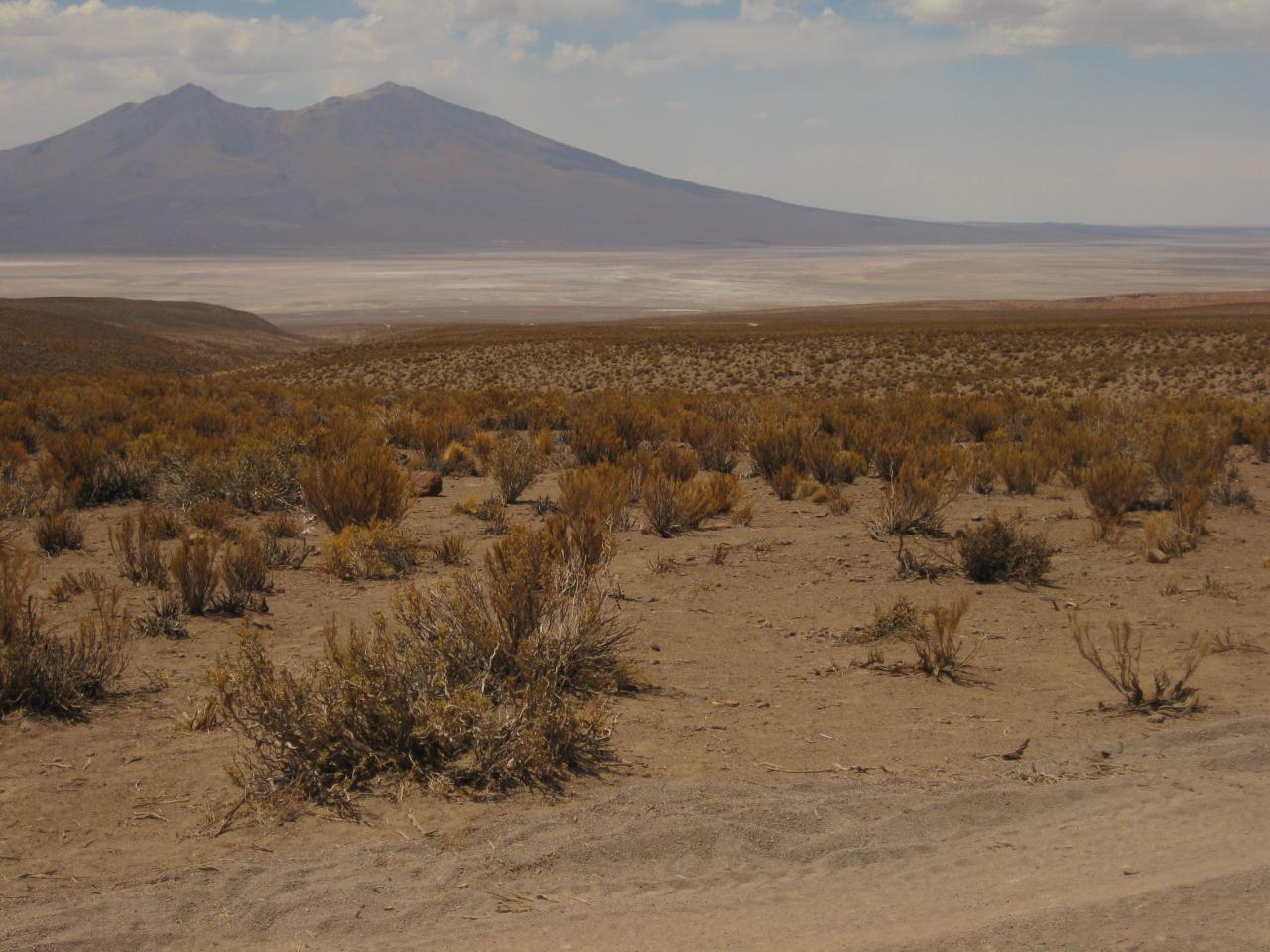 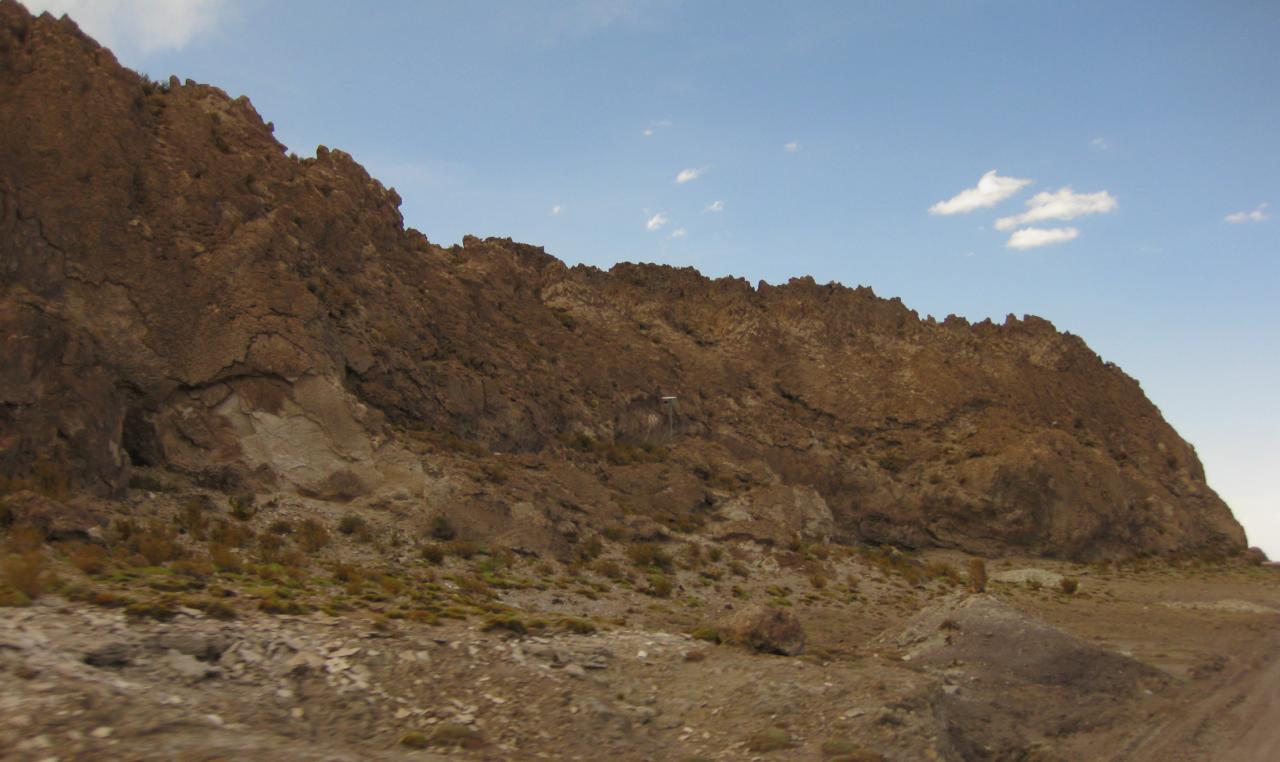 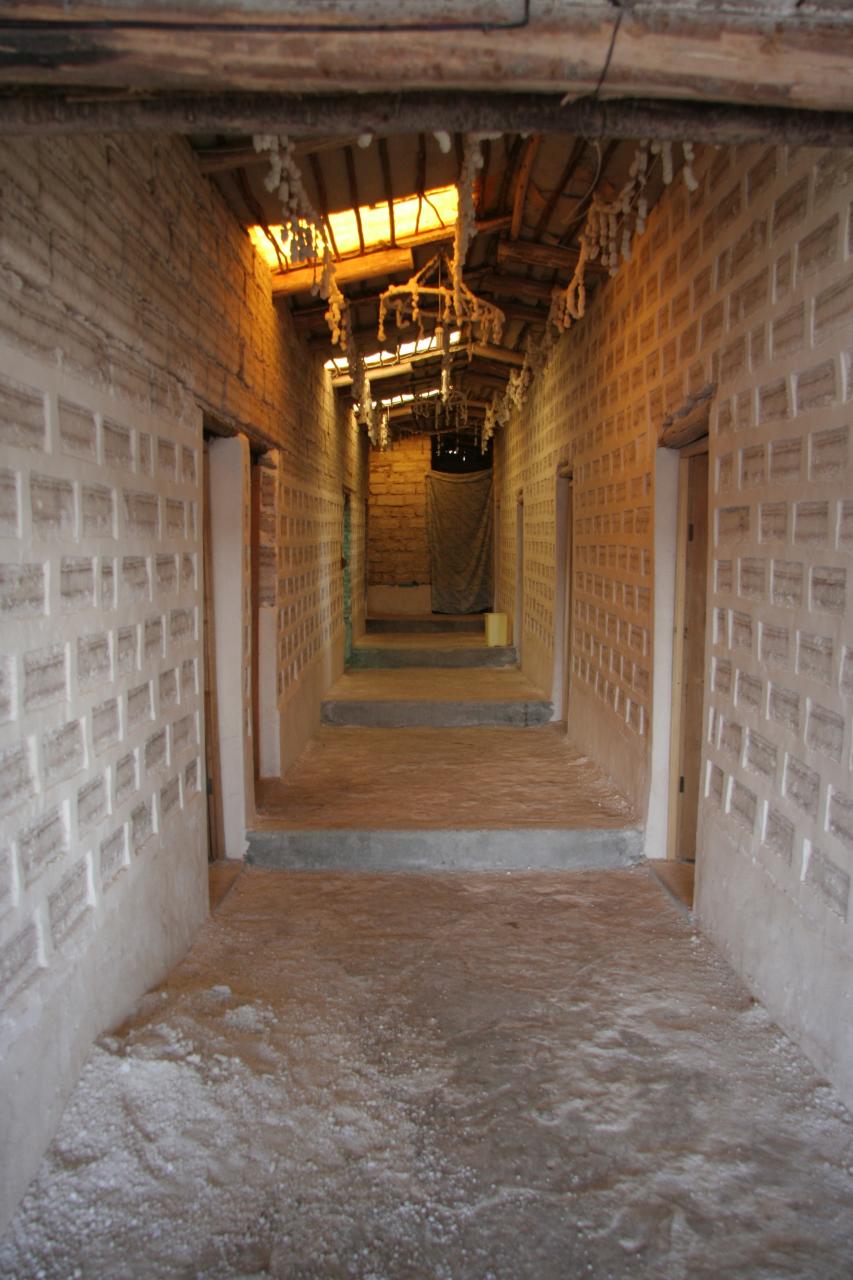 coral cliffs / inside the salt hotel

On the last day, we had to get up at 4:30 am in time to load up the jeep and get out into the grand Uyuni Salt Flats in time for the sunrise. The Salar de Uyuni is the largest salt flat in the world; it’s just white and white and white and white and flat in every direction as far as the eye can see. As the sun started to creep above the horizon, tiny blue lines of mountains appeared in the distance, one by one. We spent the day putzing around the salt flats, running and taking silly photos on the blank background. 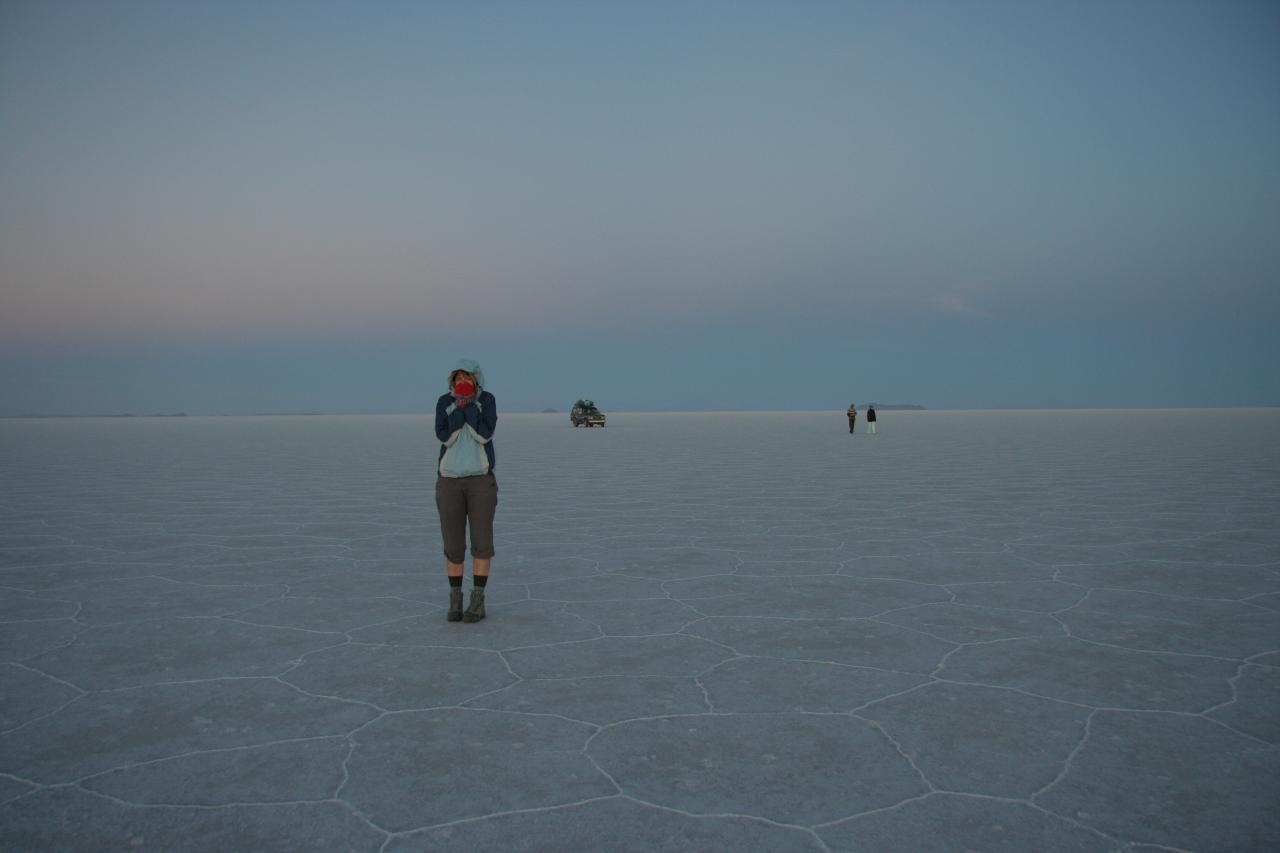 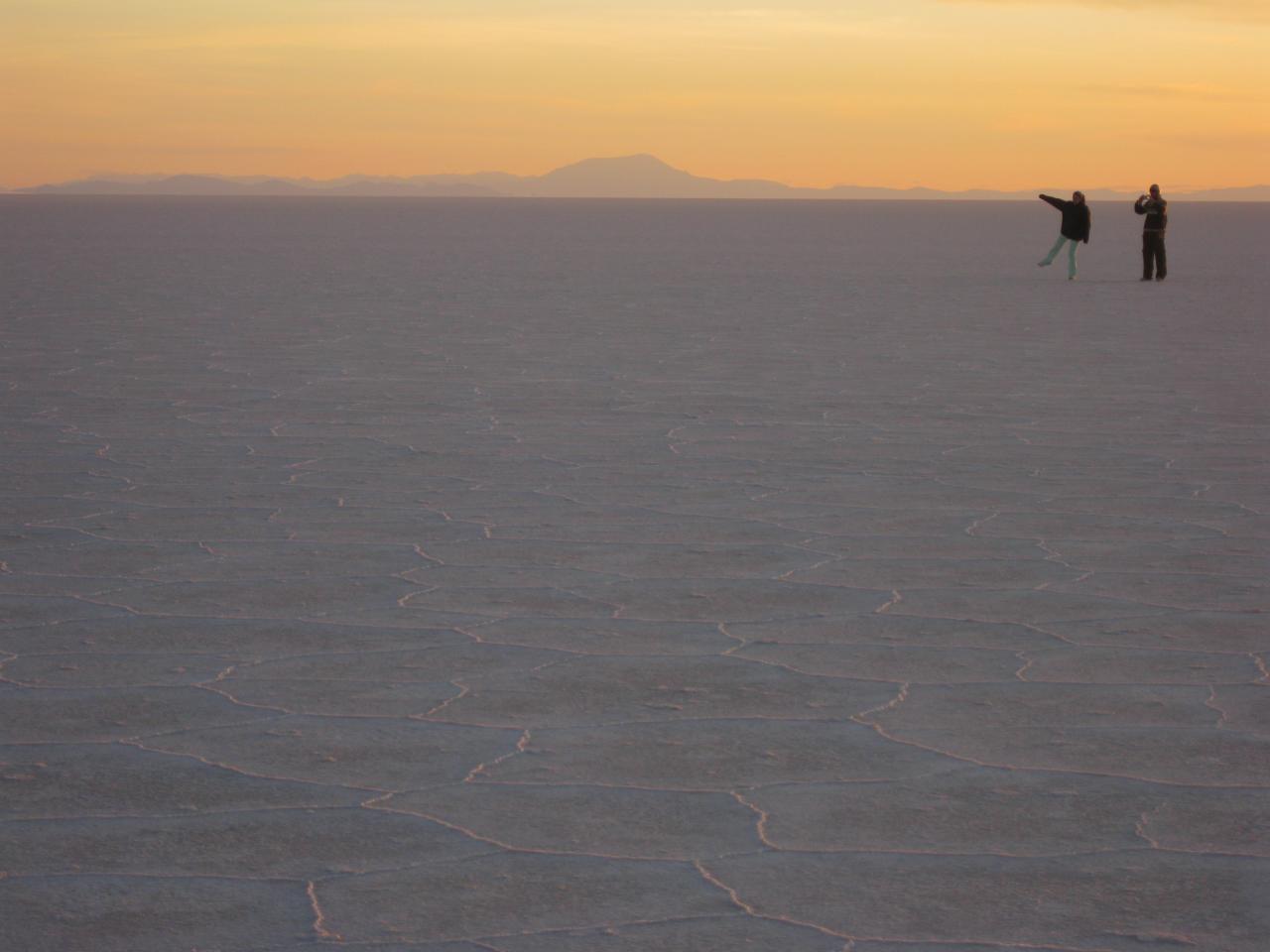 We stopped at a coral-and-cactus-covered island, Isla de Pescado (because when seen from the air it looks like a fish shape). There’s a pretty fancy visitor setup there, a beautiful hiking trail that goes up to the top of the island. Looking down from above, it really looks like the island is surrounded by ocean. When we climbed back down, a dozen or more jeeps had arrived and the picnic area was swarming with backpackers. (a lot of shorter tours leave from Uyuni so as we got close to Uyuni we started seeing a lot more jeeps). 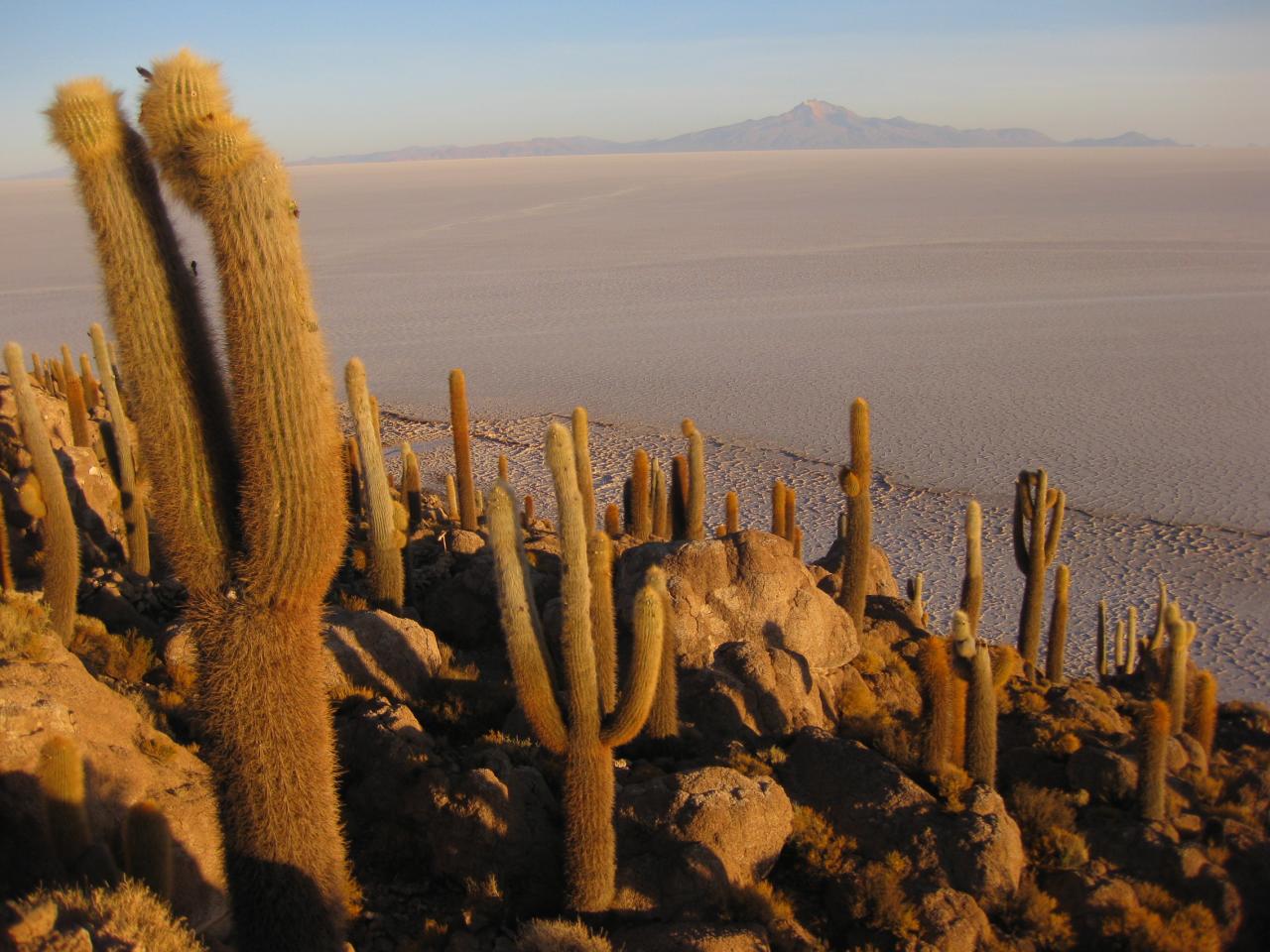 Silvia served us a last delicious picnic breakfast feast, and we got acquainted with a very friendly ostrich who was apparently brought out to the island as a wee chick and left there (poor thing), and now he makes his living begging and stealing snacks from tourists. As we cooed and snapped photos of him, the guides shooed him away and said “watch out! he’ll steal anything he can get his hands on.” 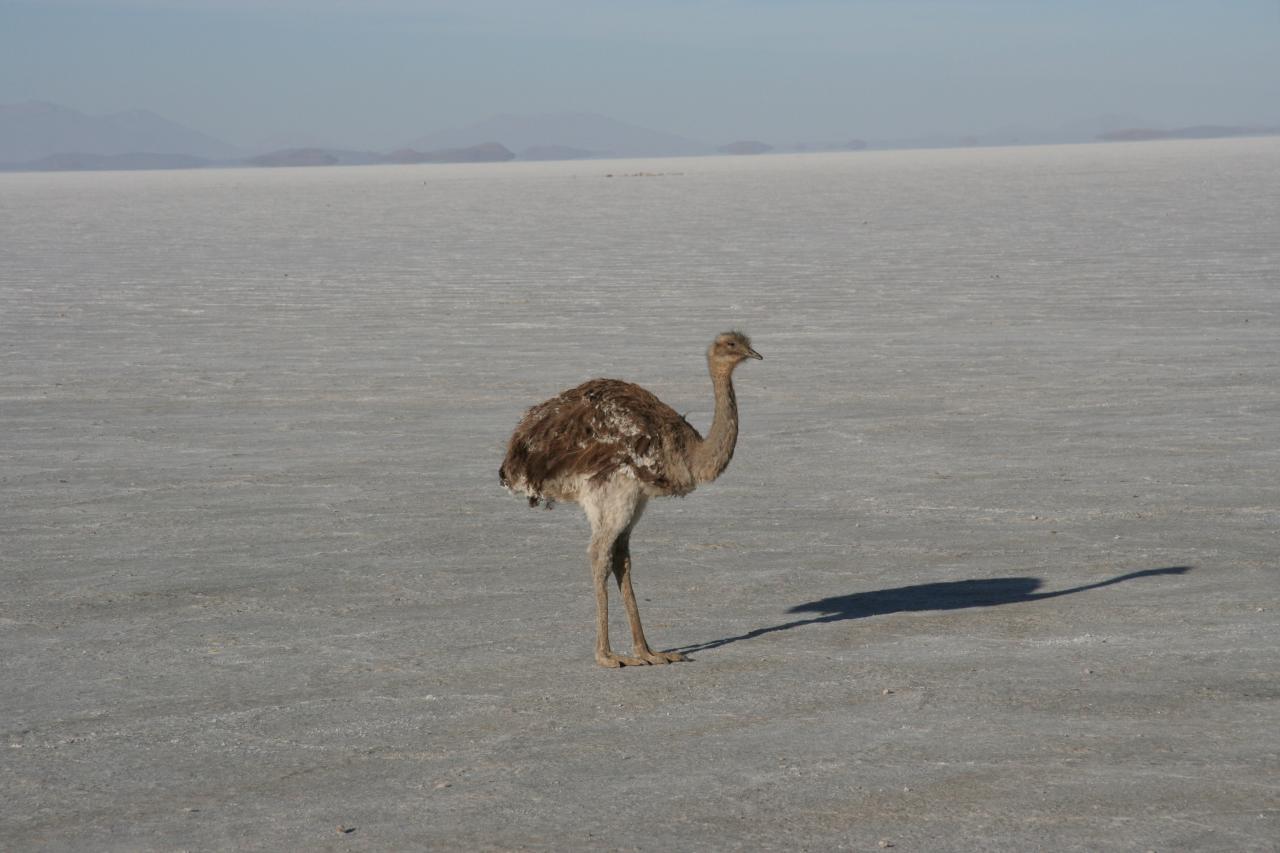 After breakfast, we went on through the salt flats, and again we could see nothing but white in every direction. The driving was mercifully smooth over the flat, hard salt. We made it all the way to the opposite end of the flats, stopped at a little salt-processing town for lunch, and then were dropped off in Uyuni, saying fond goodbyes to our guides and fellow travelers. Very very very excited to take a warm shower (first in five days!) and filled with an inexplicably intense urge to eat some pizza. 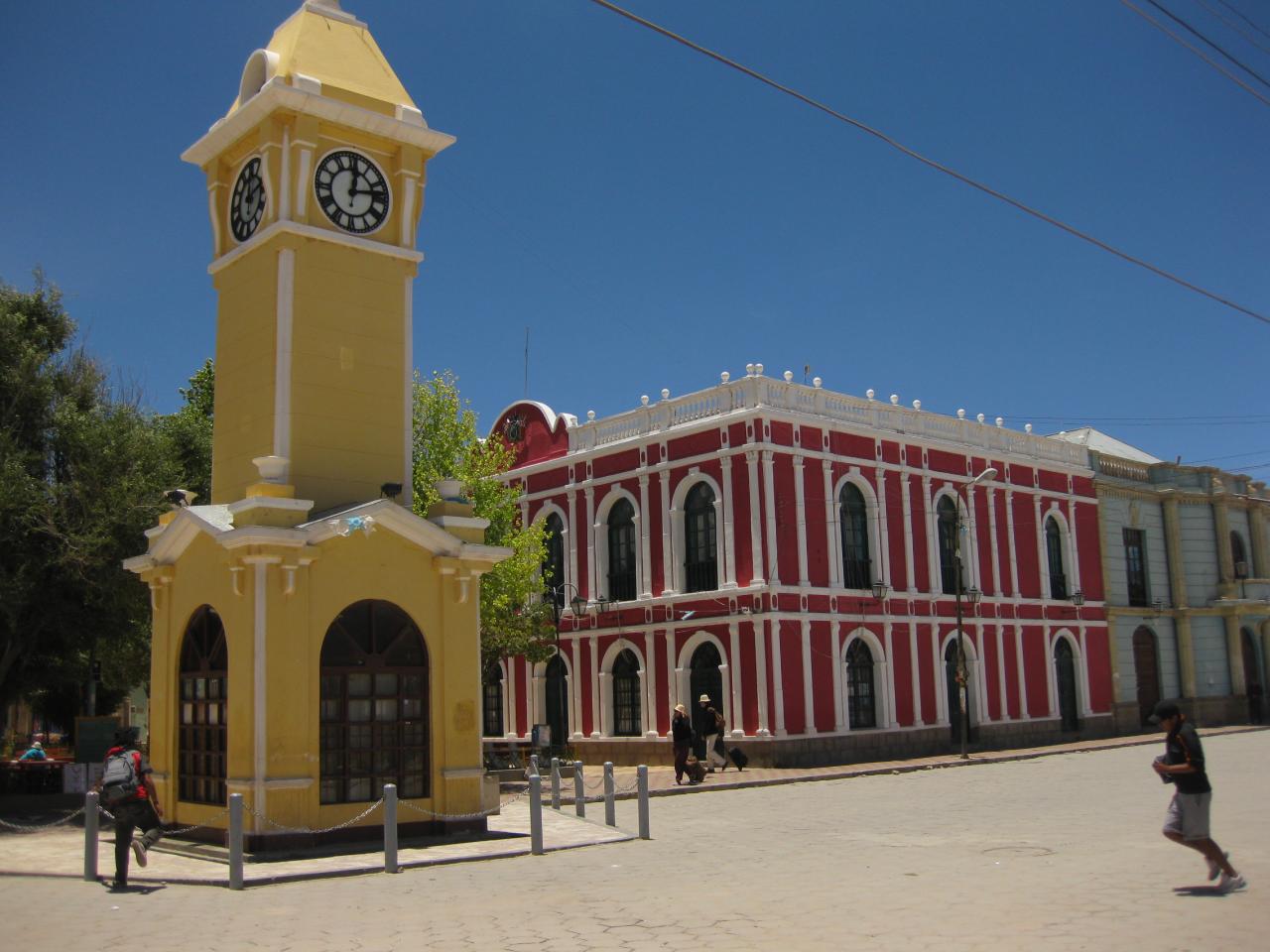 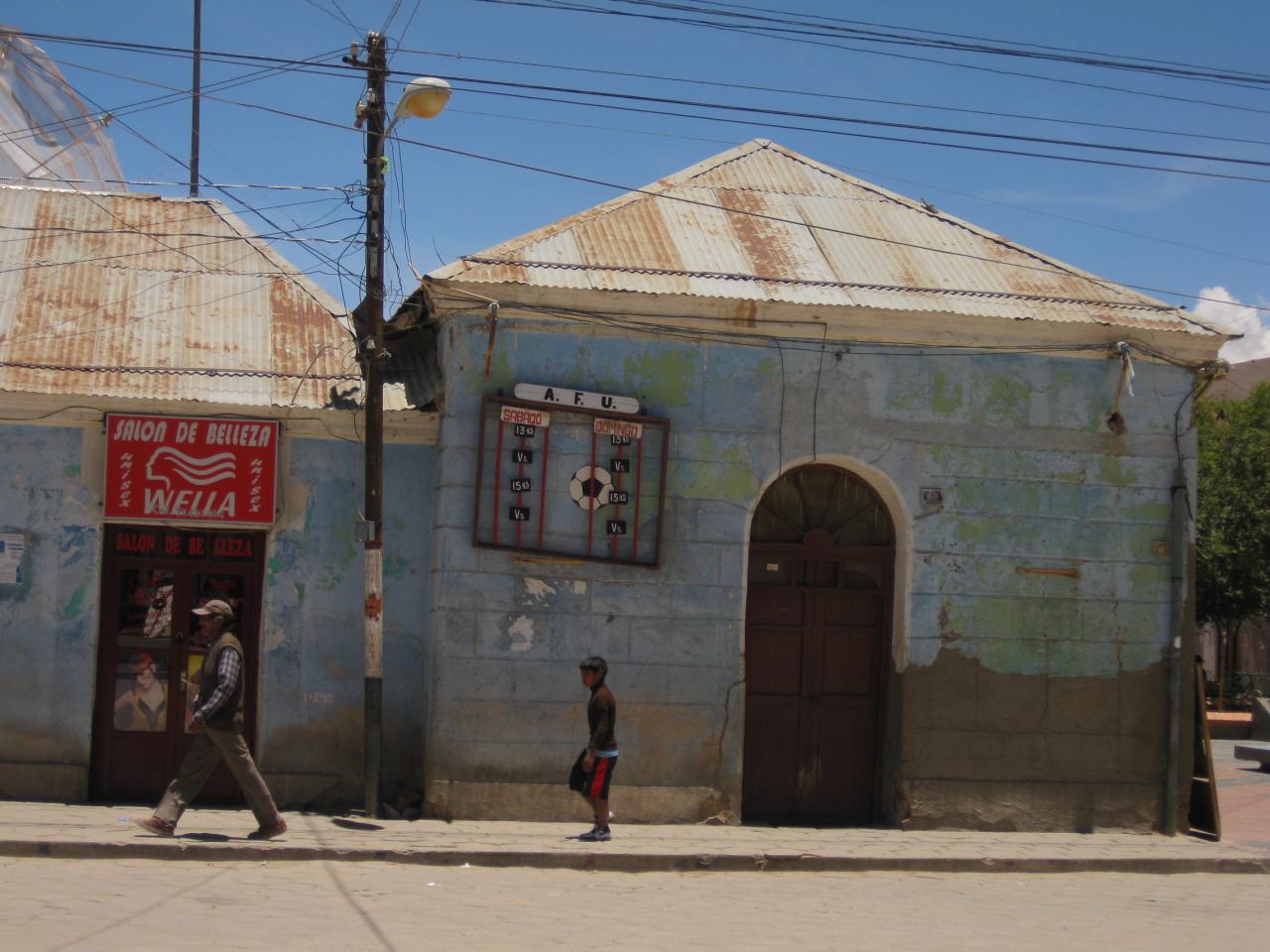 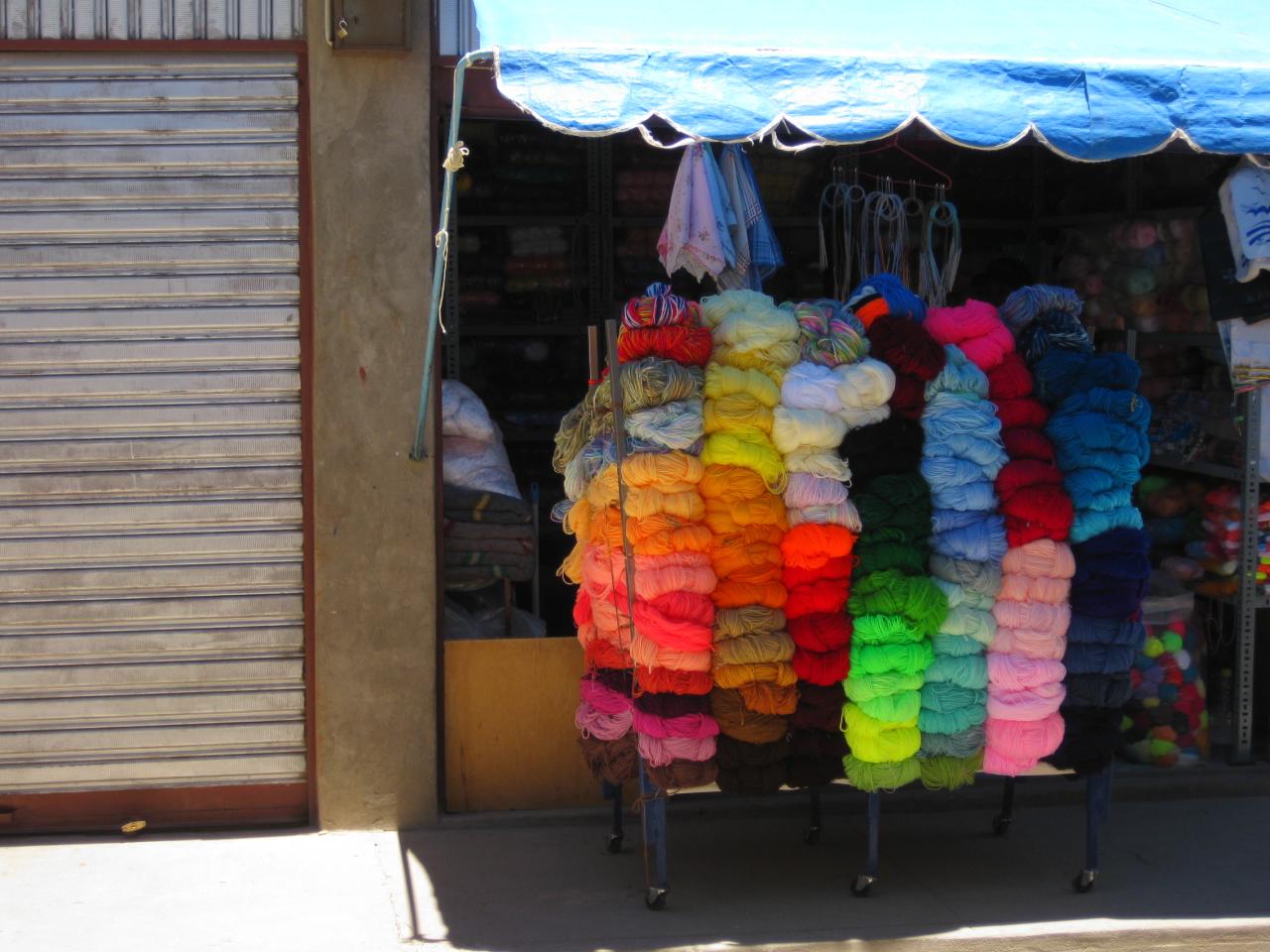