it’s REEEEEALLY cold and wintery here. We woke up to 8 inches of new snow on top of the last storm’s snow, and frozen pipes this morning. Mike defrosted the pipes with a hairdryer and I think there was no permanent damage. We’re wrapping them in heat tape today. Tonight’s supposed to be -14 degrees with a windchill of -24, and I think that’s the coldest we’ve ever had here. I keep telling myself that there are colder places in the world, and people live there, so we can do it! But it just feels so cold. snow on the remains of the barn 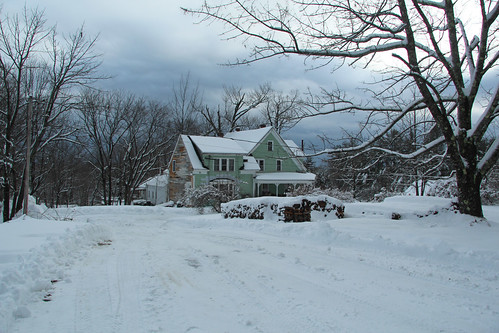 all the firewood is covered with a thick, hearty glazing of ice and then at least a foot of snow. This one’s from our friends’ house on New Years day. They’re a little further north where the ice storm was even bigger and icier than it was here. All the trees were bowed down and bent double with the weight of ice and it was a very fantastical and kind of spooky drive to get there through the frozen ice forests.