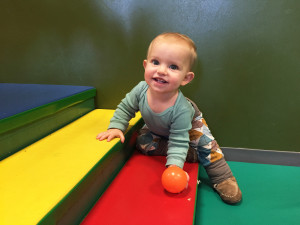 January 6. Hattie Lou at 12 months! She is such an intense and funny little dude. Her world is full of extremes. Pretty much everything is either REALLY funny (ie. when she sticks her finger in my mouth) or utterly fascinating (ie. picking at a peely sticker) or terrible, awful, dreadful (ie. not being allowed to stick her hand in the toilet). It’s so amazing to see her WILD DELIGHT at the smallest stuff. She’s standing up without holding onto anything, and cruising around while holding on to furniture (sometimes she pushes around a kitchen chair like a walker!) but not quite walking yet. It feels like it might be soon! She is good at climbing up on things, and learning to climb down too, carefully, backwards, one foot at a time. She does lots of baby talk, like mamamamama and dadadadada and “haCHAcha-cha!” which she says really loudly and happily! She talks the most when she wakes up in the morning, and when she’s eating. Sometimes she even says “Mama” but we’re still not sure if it’s really talking or just by mistake. We keep trying to teach her sign language but she’s totally not interested. She’s eating more and more food all the time but still prefers trying to feed most of it to the dog rather than eating it. She still nurses a bunch. Her favorite things right now are climbing up the stairs, pulling things off shelves, exploring, sneezes (hers or yours, equally hilarious), fridge magnets, the dog, breezes, cheerios, frozen blueberries, crackers and hummus, eating random crud off the floor. Most hated thing in the world is having food wiped off her face, closely followed by having her nails clipped. We haven’t gotten her weighed in ages but it feels like she’s suddenly gotten so big! (maybe 20 lbs?) 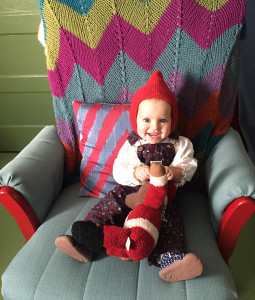 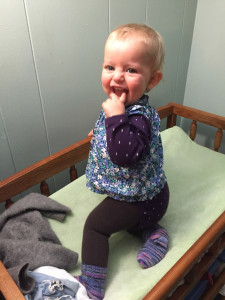