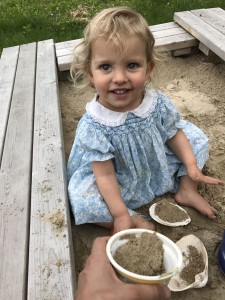 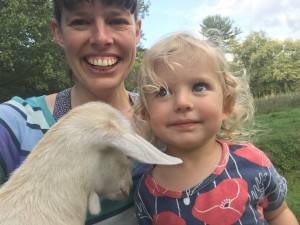 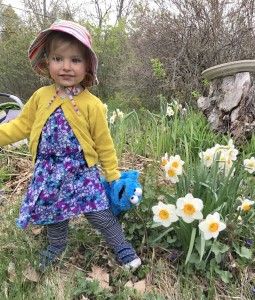 This kid. How was she ever a tiny, sleepy baby? She’s so intensely herself, now, that I can’t remember or begin to imagine that she was ever any other way. Someone wrote that toddlers are the most honest kind of person there is, and it’s so true (even when she’s lying, ha!) because she’s just a pure creature of desires and emotions, without any veneer of propriety.

It felt like she was late to start talking, I think she only had about three words at her 18 month checkup and we fretted a bit, but the pediatrician said to expect a burst in language development right before her 2nd birthday and it came, right on time. Suddenly she started adding a new word almost every day. She started out with “more” and then added “owl” and “lunch” (that’s pronounced “yutch”), “outside” (pronounced “yishe”) “this” (“eeeeesh”), “book” and “woof woof” and “shoes” and finally “Mama” and “Papa” and then “baby” when we started talking about her little sister on the way. She was also super into bears, whales, wawa… At first it was super hard for us to understand any of her words, but with time and patience and much repetition, she taught us Hattie’s version of English. Now, at 2.5, she’s got an enormous vocabulary and she’s starting to repeat EVERY single thing we say, good and bad, and sometimes we wish she would maybe just stop talking for a few minutes.

In the morning, Hattie always asks “where my Papa?” and then shortly wails “YOU NO CHANGE MY DIAPER!” (pronounced DI-YAHHHHHH”) and then reminds me, “I no wear clothes!” For breakfast, she always wants “Milk-cereal.” Moments after pouring her milk and cereal, she says “I all done” and then “I play now. You play me, Mama?” (only she says “fay” instead of “play”). When it’s time to change Sadie’s diaper, she likes to help out, dragging over her stool and climbing up to watch, then running around announcing, “Sadie poop! Yellow poop!” to everybody in the house.

Lately she’s been saying “SO much” or “just a little bit” and starting to count. Usually it’s either one or two, with two being any quantity more than one. But she’s started asking us to count things for her, and sometimes repeating numbers up to ten. The other day in the car she just said “6,7,8,9” out of the blue.

She likes to sing The Wheels on The Bus, and ABC’s, and she loves all the songs that Zoe makes up that don’t have names. Sometimes she likes it when I sing a song with her name in it, sometimes she says “You sing me, Mama?” and then “You sing Baby Sadie? You sing Papa?” but mostly when I sing she says “You no sing, Mama! NOOOOOOOOOO!” with lots of whining and screeching until I stop.

She loves to play at cleaning, helping, jumping on the couch (“I go YUMP YUMP YUMP!”), making towers out of blocks, making tunnels for her train to drive through, playing with water, going for walks, and putting her stuffed animals down for bedtime in Sadie’s car seat.